Liflaga is a social enterprise based in Stovner, a suburb on the Eastern edge of Oslo. Liflaga engages local youth in the production, maintenance and commerce of apples and apple juice.

When/ how it started:

At the head of the project is Åsmund Gylder, youth club leader native of Stovner.

“I grew up here in this area. I lived here all my life. Probably more than most other people, I am very interested in making this area a place for the future. I like to make people believe in a future together and be positive about all this nature we have here”

When he started this project in 2016, Åsmund Gylder was already involved in several social initiatives, in particular involving music and traditional culture, but he wanted to create something that was accessible by everyone, something that everyone could be part of, without any particular knowledge or skills.

Åsmund has always been interested in local culture, the history of places and the connection of human culture to the land. The Liflaga project is intimately related to its specific location, “[Stovner] It's known for apple trees, all this area. So the idea has been in my head for many years. Let's pick apples and make it a youth-empowering thing, so that we can earn money and learn to touch the Earth. You can create meeting places that you can enjoy with kids, adults, you know, grandmothers and grandfathers, everyone can meet up and pick apples for a higher reason. It turned out to be a perfect way to involve each other, to talk about history, to learn, to create together. To me It's a lifestyle more than it is a project actually.”

Stovner is often perceived as a problematic neighbourhood. Like in many other urban peripheries around the world, the distance from the city centre and the large amount of immigrant population are unjustified generators of a strong stigmatization. Åsmund sees Liflaga as a way to challenge public perception and rehabilitate hopes for the future of the young residents. “That's probably the most important thing with the whole project: to build up a new reputation for young people in this area...I think that we are a little step ahead up here because we have all this nature and are intimately connected to it. Gardens can be so much more. They can be like storytelling places, where you have kids to cook and sell local food. You can make your own cakes. Take your mother with you, a place where I can show myself, my culture, my family. So this is an important part of what we are doing. But since it's apples, it's very easy to talk about that. I really think we have to create places where people can feel that they can grow together.”

The work at Liflaga is carried out following the seasons, throughout the year. The youths are involved in the whole process. In winter and spring new trees are planted and old ones are taken care of - the group prunes trees also for older neighbors who are not able to do it. During harvest season they collect apples from a variety of donors, including trees in public areas, from farmers and from private plots: once a common occupation, tree-farming is nowadays abandoned by most households and apples would be left to rot without the intervention of Liflaga. The collected apples are squeezed and bottled under Liflaga very own brand, and sold locally or in the greater region. The local shopping mall is lending a shop space (free of charge) where the group can sell their juice directly. This becomes a further educational occasion “They learn how to apply, write their own CV to then get a proper job. This is the start of a project for getting a proper job later on. So we have our own youth in charge of being leaders for the small groups they are working with. I'm trying to teach young people history, cultivation and business, everything in one package”.

How does it work:

Liflaga is an open program based partly on volunteering work and several paid summer jobs funded by the local municipality. Youth go through an application process or are recruited in collaboration with asylum reception centers, schools, sports clubs and other local institutions. This summer the project occupied 23 youth for a period of three weeks.

I think because then we can actually pay a lot of people to work with this all year through and still have this idealistic thing with picking apples in the Autumn, but but not only in September and October it's all there.

Combining other uses (market, cafe) as a meeting place for the community  (Audio maybe)

number of numbered 0.7 liter bottles of apple juice in handmade wooden boxes. With artwork contributions of 12 Norwegian artists, photographers and illustrators on the labels.

invite artists that the kids know very well, and other prominent people to design the labels of the apple juice bottle

To engage more and more local youth, Åsmund is seeking several parallel strategies that go from the organization of recreational events, interviews to local ‘celebrities’ and collaborations with young artists (their upcoming special edition will feature labels designed by some of the most promising Norwegian graphic artists). “I feel like it's harder and harder to find new people to recruit. Those who started this with me in 2016...they wanted to stand up for the refugees and do something. Now It's like you have to look for it and you have to sort of, water and feed it to grow. It's inspiring but difficult because it's changing every year. I would say it's strange, but maybe it has to do with the way people communicate on the internet.” Ttill, he is very optimistic about the Liflaga method “It's so interesting and it opens up another way of thinking. It's not like school. It's more like the wow part of something.”

Wahida 17 years old, started working with Liflaga when she was 15. “I always wanted to do something for my community but I didn’t know where to start. I love my neighborhood.  It is located in the East Side, and the East Side has that reputation, but it's a very cultural and very diverse neighborhood and there are always things happening here. Good and bad, of course. There are very many people that are so nice and kind and people are really helpful here. There are also people that don't realize that maybe we should do this for our community. Maybe we could do that. And I think some of it is due to knowledge. Not a lot of people here has the knowledge about the importance of helping out in our community, but it's a very nice neighborhood and I have lived here my whole life and I wouldn't move to another place.

I always thought about it, but I didn't know how to do it. So it was just like an open door when the opportunity came (through Liflaga) and we have opened several people's eyes. Actually very many young people and I'm very glad to be a part of that.”

I think in Oslo generally, it's it's an Awakening, very good things going on, talking about the soil in Norway how we should use it for. Cultivating food instead of building new shopping Mall and Roads and big fancy buildings and stuff like that to take care of the soil, but that's a bigger picture.

it's easier to focus on what we are doing right here and then just like the National  thing.

What does it mean:

In Nordic mythology Lif and Lifthrasir are the human couple who survived under the roots of the world tree Yggdrasil after the world fire in Ragnarök. A big battle between the gods and bad forces. There, in Hoddmimir's wood, they feed on the morning dew and become ancestors of a new human race, which heralds a new cycle of life. It's about Norwegian history and the power to start up again a new life regardless of the past as part of nature.

What is the status today/ next steps :

this is like a start-up project three years and that little store is run by youth right now. That is eight eight youths . They're selling apple juice and  Honey, which is created right back here, a lot of people standing in lines to buy apple juice made from youth in Stormer. It's it's beautiful thing.

So that is really a breakthrough for us because then it's not only about September and picking apples. not being used and will be thrown way. 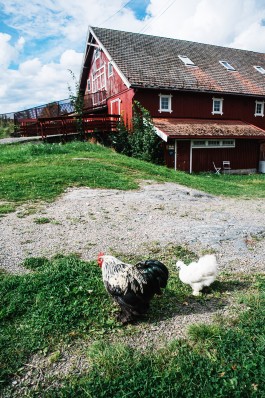 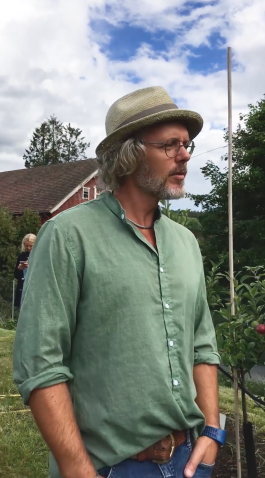 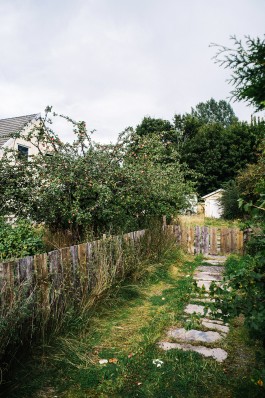 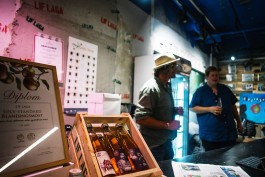