It might sound strange, but Oslo is a river city. Everyone associates the city with the fjord, but Oslo counts 10 rivers and streams very much connected to the history of the city. Starting off with a group of pioneers, Oslo Elveforum grew into a community that makes waterways accessible to citizens and visitors, thus ensuring that the city of Oslo prioritizes living watercourses and biological diversity over development interests.

Oslo River Forum is a non-profit organization, founded in 2000 as a committee for volunteer groups and associations working along Oslo’s rivers. But their story goes way back. In the 1970s, amid a general spirit of environmentalism and a growing demand for a clean, safe environment and a better quality of urban life, a group of pioneering environmental activists joined forces to discuss the water and help reopen the rivers and streams.

“Some of them were engineers, quite technical people,” says Sidsel Andersen, deputy leader of the forum and representative of the Hovinbekken group. “And it had a lot to do with their profession. But the group brought together many different professionals. For example, that man there was an electrician,” Sidsel says, pointing at a picture. “He was just interested and got involved. Now he is 95 years old and still part of the group”.

“They drew a lot of attention and were present in the local scene. They influenced politicians by writing letters and opinion pieces in local newspapers, but the dynamics changed throughout the decades, depending on the people. Oslo is a lucky place, surrounded by forest and the fjord and then all these small and big rivers flowing down to the fjord basin. This is the signature of Oslo. The medieval city of Oslo [todays Gamlebyen neighborhood], was located between two rivers, Alna and Hovinbekken. Those were the natural borders of the city,” Sidsel says while pointing at an old map.

Historically, the rivers in Oslo were used for agriculture and industrial activities. The waterfalls of Akerselva, the river that runs through Oslo’s most central areas, were harnessed in the 1840s to launch the Industrial Revolution in Norway and drive Oslo’s growth. The river bed is mainly silt, so many brick factories were located along this river. In the beginning of the 20th century , the Alna was covered because of the new railway. The extensive industrialization and increasing population led to water pollution, which endangered public health. After the Second World War, the city decided to cover many of the waterways in culverts and underground pipes, something that also created land for urban development.

“I grew up here,” Sidsel recalls. “In the 1960s the water was really dirty, so we couldn't swim – I mean, we were swimming, but it wasn’t healthy. There was a big textile dyeing industry outside of Oslo. Every day we would wonder, what is the color of the river today?”

Over the past decades the attitude has changed. As in many other cities, clean running water has taken on a new role in Oslo. Where it is possible, the city has started reopening stretches of the rivers and streams, transforming them to vital recreation areas and green spaces that support animal and plant life and combining them with surface rainwater management. In 2019 Oslo was the green capital of Europe precisely because of these actions, and Oslo River Forum has been a driving force.

Oslo River Forum’s board is an assembly of 10 groups, one for every river. It is the coordinating body of the whole community and represents it at the city’s professional and political bodies. Their activities include environmental activism, politics, and hands-on work that makes sure that the city’s spatial planning promotes and protects the development of Oslo’s blue-green network. They write letters and submit comments to all plans and zoning cases that concern rivers and streams, protesting when developments are proposed within the 20- and 12-meter limits stated in the city’s zoning guidelines.

“We became quite popular,” Sidsel says. “The politicians understood that we have people all along the river who have very local knowledge that the politicians themselves will never manage to get. So now we are working closely with planning authorities and with environmental and water management authorities We are like an oversight committee. We are very alert, and we work together with the municipality. They send us all the information about new plans – it’s like a hearing.”

The forum is based on volunteer work and the expertise of its individual members. “In my case, since I know everything about City Planning, I can give short or longer comments, depending on the case, but it’s mostly to show that we are here, watching. We also carry out measures. Some groups are very good at it. They clear the woods and look after things all the time, but that differs a little bit from group to group. We also arrange thematic walks, on birds, biology, and water management.”

Sidsel is a retired architect and for many years worked at the Ministry of Environment. She always wanted to work locally, so before her retirement she was involved for 10 years in one of the biggest river rehabilitation projects along the river Hovinbekken in Groruddalen, an area previously dominated by industry. The project brought all the stakeholders – the state, the municipality, and the locals – to one table.

“When we opened a 300-meter stretch, it was on a very cold winter’s day. After some days, the workers weren’t even finished with opening and they suddenly stood there with fish in their hands coming out of the pipes. The river was alive!"

"There is so much to learn from a river. It is educating. It functions like a magnifying glass. If the water is clean, people see it, it’s visible. If they see changes in the color, the smell, they can imagine that something is wrong, something is polluting. It’s easy to understand.”

“The quality of the water differs from place to place. Once we wanted to create a small lake in a neighborhood, but upstream pollution that came from some place made it impossible to swim, so we had to give up the idea. But this made the municipality look at all the pipelines upstream. So now they’ve spent much more money on repairing the pipes than on the park,” Sidsel says laughing. “There is a lot of pressure, of course. The ambition is to have the EU Blue Water certificate, so they have been measuring all the time. Because of the silt when there is heavy rain, the water gets gray. And then people complain, ‘Oh, it’s not clean!’ But I think you have to learn about how the water behaves – you can’t force it anyway to be clean all the time. So you have to accept that you can’t swim today because it rained heavily two days ago. It’s all about awareness and education.”

“The forum is like the rivers – it’s a network. If a group only cares about their own stretch and won’t coordinate with those upstream, it doesn’t work. And of course, the fjord is also affected. It’s all part of the same system, social and natural." It seems that most people understand this point, although within the forum there is resistance and negative voices to the opening of the rivers. Some people are worried about their privacy, others are afraid that kids will drown and that there will be mosquitoes. “It’s the same with the waterfront – you can’t live in Norway and be afraid of water,” Sidsel argues.

The forum grew from a small group of pioneering activists into an established organization able to influence development policies. However, despite the great history, the future seems tricky.

“The challenge right now is that the forum mostly consists of retired people. It seems that environmentalism skipped one generation. We have difficulties recruiting young people, so we are thinking about changing our strategy. Social media is very important. We want to inspire as many people as possible to get involved in a local ownership of the city’s rivers and streams through a river adoption program with schools. Schools are very important, but then again it depends on the teachers. But I am optimistic. The young generation is very interested and environmentally conscious. The whole Fridays for Future movement is very promising.” 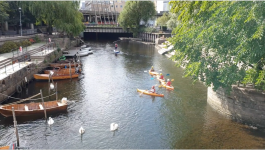 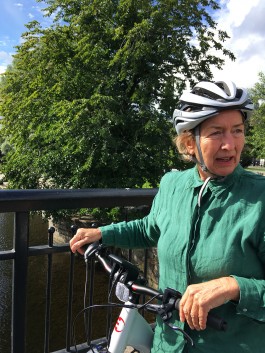 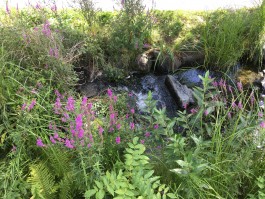