Martinka Bobrikova & Oscar de Carmen are an artist duo working together since 2005. Their work, often community-based, challenges the border between art and the critical practice of everyday life. From alternative artist residencies to dumpster diving to an unwritten survival guide to Oslo, their practice questions what can be considered institutional or not, investigates the mechanisms and contexts that create systems of values, criticizes our consumerist society, and advocates for circularity.

Martinka and Oscar are originally from Slovakia and Spain, respectively. They met 15 years ago in Spain, and since 2007, after taking their MA in Sweden, they have been based in Oslo. Their work can be visible in exhibitions, events, and so on, but mostly it is invisible. As they say, “It is micro actions connected to our everyday life. This is not art, it’s something else. It is acts of affection and solidarity.”

Since 2012 they have run Nomad AIR, a nomadic artist-in-residence program that focuses on the notion of hospitality and the social relations between “host” and “guest”, parasitizing the infrastructure of other institutions. The project takes a critical look at the dynamics, meaning, and processes of international artist residency programs and focuses on the human relationships created within such formats. As part of the artistic intervention, they act as managers by inviting other people to spend time with them in the same space. In this way, they share the infrastructure and the experience. They have also been running the residency in their private space in Oslo. It is not an institutional residency, but they cover travel costs and invest their private time and knowledge.

“We never received any grant for this, and we are very happy about that, because this allows us total freedom. We don’t need to report to anyone why we do the things we do. We like the idea of an open interaction with the art world more. For us, it is an act of affection and sharing. We can share space and knowledge and take our practice further by sharing resources and bringing people together that normally wouldn’t meet, enjoying the time on a personal and intellectual level.”

Oslo is an expensive city, and there is no handbook on how to survive with no money. “Our work and everyday life is all about resources, sustainability, and sharing,” says Martinka. “I guess it comes from our life experience, wanting to do something and having no money.” In their view, money is not the answer to everything – what counts is the will to do something and find creative ways to navigate. Take dumpster diving, for example. “It might sound stupid, but it’s something we do constantly, every day while looking for recycling material. It’s a kind of a life statement that you don’t want to buy new things, so you find the way by reusing something that already exists. This simple act can actually be fruitful and provide inspiration for possible future projects.”

For Martinka and Oscar, actions like dumpster diving are critical investigations of our social habits. Although Norway is quite a wealthy country, there are people, both foreigners and locals, who really cannot afford to live there. But it’s not always easy to talk about it. Despite the existing social infrastructure, anonymous soup kitchens, charities, and so forth, Martinka and Oscar argue that it is not easy for everyone to access this information and that it is a taboo to ask. “People don’t talk about their problems because, you know, the society is built like that, you have to look great and be successful. There’s nothing wrong in queuing for food, and there are many places like that, in every neighborhood. People might do it, but they don’t feel comfortable talking about it. Not having enough of something is a taboo. People feel ashamed.”

But Martinka and Oscar are experts and want to share their knowledge with their community on free access to food, drinks, material, clothing, basically everything. “In Norway, people throw away all kinds of things. You can find everything second-hand, almost unused! For example, in front of our studio there is a recycling container for clothes and textiles, vintage or second-hand. It belongs to a big charity company. You can find amazing things there. Oscar especially, he always finds things and gives them away to people that he knows would fit perfectly. There is an interesting conflict between public and private there. When the container is completely full and things are on the floor, the company doesn’t collect them, and since the street is public space, the municipality of Oslo considers them trash and they are eventually destroyed. Brand new stuff with labels. This is insane!”

Our cities are full of resources, waiting to be claimed. There are so many things out there: furniture, food, fruit, herbs … People have generally lost touch with the idea that “the city is ours”. Everything is turned into a commercial venture.

“Why continue chipping into the global system by working and producing more junk instead of actually hacking the system and using the city as a kind of playground to sort everything out?!"

"At some point we realized that the most valuable thing in life is time, influenced by the idea of anarcho-passivity, the ideology of anarchism and the concept of time and value and a better quality of life. When you have a regular job, you spend all your time working in order to pay for food, clothes, and so on. If you spend these hours directly to find the food and find clothes … this could be the value. It is a job in a way.”

Martinka and Oscar dream of a world full of hackers. They want us all to get out of our comfort zones. “You might not have money, but you can still have good nutrition and looks. You don’t need to enslave yourself to work on the altar of earning money for consumption. There is so much waste out there that you can be picky, you can get posh!! The city is ours. We have to benefit from it, we have to take it back.” 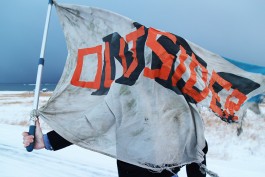 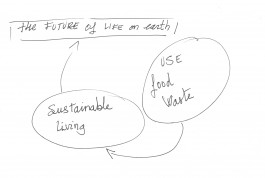 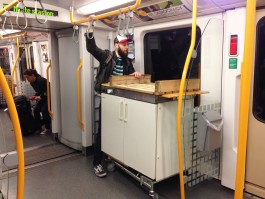 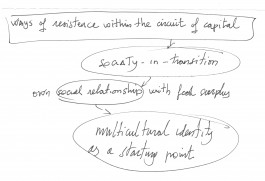 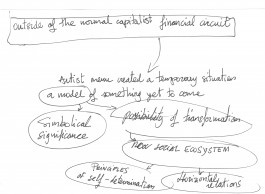