While venturing past the Oslo Opera House, which has redefined the image of the harbor and become perhaps the most well-known landmark of the city, one cannot help noticing its stark contrast with a bunch of rickety wooden structures that populate one of the last industrial-looking piers. A series of floating cabins form what is known as the original Oslo Floating Saunas, while a transparent, Buckminster Füller-like dome pops out of the pier behind them.

The mastermind behind this beautiful mess is Hans Jørgen Hamre, anthropologist and history teacher, who has been involved for two decades in activist actions in the Oslofjord. Hans Jørgen lived part of his adult life on a boat and he is part of a large community of “boat people” who consider Norwegian waters their home.

“My work is about participating in the transition of the Oslo’s inner harbor from an industrial harbor to becoming a recreational place. Since 2010 I’ve been working professionally or actively to make this happen because there are many conflicts in how they made the Fjord City plan. I don’t know if you guys know this all that well, but the transformation of the harbor is taking place for 40 years now, and there’s a big tension there.”

Since the 1980s and the Aker Brygge project, the city has carried out a huge process of urban renewal to repurpose the whole inner harbor. According to the Fjord City plan issued by the city council in 2000, the ultimate goal was to make the port accessible to all citizens. However, Hans Jørgen argues that the borders between city and water are stronger than ever, especially from a regulatory standpoint.

“I live in a boat just outside the city center, like 400 meters or so, and we can see the whole Harbor Promenade. It’s nine kilometers long, and we have no access to it at all. We cannot go in there and dock to, say, to buy bread. It’s just closed. It’s an invisible wall running through the city. People can go and see the water, but then actually getting into the water is impossible, and it is meant to be impossible, by the harbor authorities. Politicians so far have never dared to question this authority. Every boat person in Norway knows that you better stay out of Oslo. There’s only one marina here, since the 1980s, and it’s the most expensive one in Norway.”

As a provocative workaround, a few years ago Hans Jørgen put together a group of friends and some recycled materials to build and operate a small floating sauna, to be anchored right in the middle of the inner harbor.

“With my crew we changed strategy and built the floating sauna. It was a much better tool for this operation because it heated up the people. It became so popular and got so much attention that the harbor authorities couldn’t just throw it out. Now there are about 13 floating saunas, which received more than a hundred thousand guests in the inner harbor of Oslo, so the harbor authorities finally gave us some sort of consent. It’s not something they want, but it’s very much what the population wants, so this is a battle we have already won.”

The original DIY structure is now clustered together with other saunas of all shapes around a small temporary pier, just beside the Opera House. Running the operations now is a nonprofit organization called Oslo Badstuforening, directed by Ragna.

“I was part of the ice bathing club at the Ministry of Foreign Affairs,” she explains, “and we swam in the fjord all year long, every Thursday at eight in the morning. No one wanted us to use the harbor all year long. I mean, it was just there for the summer, but we all wanted to use it in the winter too, and it’s fine to swim in the winter. But the condition of the harbor wasn’t prepared for people wanting to swim in the winter. And that’s how we met Hans Jørgen and the sauna. The ice bathing club just started to use the sauna, and we became friends with the anarchists and eventually founded a nonprofit organization.”

Since then, operations have been so successful that the organization consistently won grants for expanding their facilities. Each year they built a new floating sauna, either with the help of voluntary community work or through competitions for young architects and help from sponsors. Oslo Badstuforening employs a full-time team of sauna-masters and manages to keep really affordable prices. They organize weekly events and focus on keeping the saunas accessible to all. On weekends the waiting list is long.

“It’s become extremely popular and it makes people experience the fjord in the winter, which they thought they couldn’t,” Ragna says. “It opens up a new world to Oslo’s residents.”

Despite the huge success of these new floating public facilities, the struggle for maintaining accessibility to the water is far from over. The berth where the saunas are located is one of the last remaining open areas in the inner fjord. Hans Jørgen is busy with a new project there.

“The next thing I’m working on now is a floating classroom, or floating greenhouse. It’s fairly big. We`ve had the same challenges with the municipality and the harbor authorities with finding a place to moor it, and it is obvious that they are not rigged to welcome floating bottom up initiatives. We have all kinds of problems now because we don’t have anywhere to put it, we don’t have sufficient funding for the necessary repairs to keep the place open to the public. But, coincidentally, we also have it located now at the most disputed property in Oslo, where the harbor authority plans to build a House of Photography.”

The mentioned area looks indeed like a rather undecided space, with unclear fencing, a diverse array of docked boats, and a series of new containers that host the temporary exhibitions of the House of Photography. The construction of the new museum has currently been put on hold, while authorities study alternative developments, following the wide-reaching campaign of a large group of local activists (including Oslo Badstuforening) who would rather see the plot transformed into a public beach. The issue is still open and has catalyzed much of the political attention in recent months.

The management of a space as undefined as a harbor in transition exposes the limitations of typically rigid regulatory frameworks, but also offers great opportunities and loopholes for the adventurous and inventive. Talking about his guerrilla tactics, Hans Jørgen explains how he managed to keep the first floating sauna anchored despite the restrictions.

According to Ragna, these kinds of endless struggles originate from a lack of imagination inherent in the systems of urban planning.

“The first reaction of local governments is always ‘no’, first of all because they think it’s too much. It doesn’t fit the rules and regulations. But once they see the potential and that it’s actually very easy, you just have to say ‘yes, we are open’, and then you can adjust things along the way. There is no imagination in local bureaucracy – that’s why we have lobbied with the politicians. If politicians convince bureaucrats that this is a good idea, then they have to look into it seriously.”

Hans Jørgen confirms her opinion and insists that the hands-on approach works.

“If you want to act according to the rules as they are, it’s almost impossible to do anything. But if you’re a bit creative and able to improvise and to move things and to play around, then there’s a small window and that’s what I’m taking advantage of. Now with the floating classroom … we just built it and put it in the water and it’s like, okay, let’s see what happens.”

The floating classroom is the aforementioned dome, built on an array of huge plastic tanks. It sports a razzle-dazzle color scheme designed by local artist Felipe Ridao, and it flies the rainbow flag. Hans Jørgen explains that the structure is a platform for experiments. A solar-powered desalination system pumps seawater into hydroponic vegetable gardens that take advantage of the microclimate generated by the greenhouse. Underwater structures will eventually support aquaculture and help filtrate and cleanse the harbor waters. But for Hans Jørgen, this is above all an educational project.

“Norway is the world leader of aquaculture, but there is no project to promote this in Oslo. There have been petitions about entrepreneurship and sustainability for schools, and they don’t actually have anything yet. With the floating classroom I want to work with the local pupils here."

"We have a quite big immigrant population in Oslo, and these people are not aware of the opportunities we have along the coast and in the ocean, so it’s a goal of the project to make these opportunities accessible, to solve the problems of inner-city youth and school dropout.”

Thinking about the present and future audiences of their saunas, Ragna shares the same concerns. “Just beside the harbor is one of the poorest areas of Oslo and Norway, and the residents don’t feel like the fjord is there for them, because the big corporate businesses in the high-rise buildings in between are treating it as if it’s only theirs. They block the sea view and increase the distance. So that’s something we’re working on, and this fall we will invite all the classes of this part of the city, mostly 12-year-olds, to come try our sauna and own the fjord. We would love for them to try this with us in safe conditions with a lot of safety gear. A lot of them can’t even swim, which is crazy in a country that is so reliant on the sea.”

The fight to open up accessibility to the Oslofjord is more than just a clash of different tastes in lifestyle or leisure. For a city that is built around its waters, this is a fundamental matter of democracy and equality, as the fervor that animates these activist experiences clearly exposes.

"My doctor told me not to mention the word ‘project’." Hans Jørgen jokes: "This interview is the last thing I’ll do, I promise.” Good thing that we don’t believe him at all. 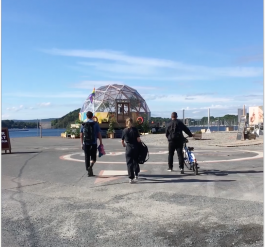 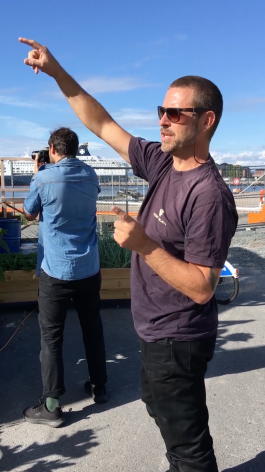 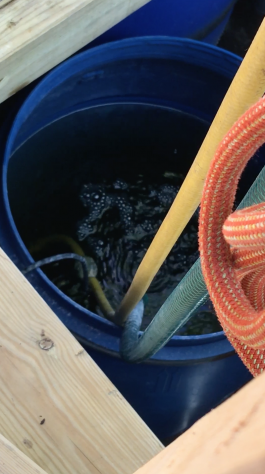