Gamlebyen Sport og Fritid (GSF), which translates as “Old Town Sports and Leisure”, was officially founded in the summer of 1999 at the intersection of one of the main arteries leading out of Oslo, nearby a massive railway. Today it is one of the best known “spots” for skating and graffiti art in Norway. Skaters and artists roll in from all around Scandinavia to visit the park.

Alto Braveboy, who has been the spokesperson of GSF for all these years and lives right next to the park, recalls when he first found out that kids were using the area for skateboarding.

“It was a dump. It was full of vermin, of rats and whatnot. Human waste, you know kitchen waste, car wrecks. All kinds of stuff. It was literally a proper dump. So you can imagine when the first time I looked in as I was passing by and I saw three pieces of plywood and then I stopped. It looked kind of like a skate ramp, something that these kids just built up to learn. It came like a flash. I knew we had the chance to really pull something off here and I started to see all the hands, all the people we have, the children and what they don’t have in such a beautiful place.” What the area lacked in polish it made up for with charm. “Right next to this area was Oslo’s second-oldest guest house. When that was still open, we used to just sit there and drink beer. There would be these old girls around, you know, 75 sitting together with punk rockers with a 45-centimeter Mohawk talking about the problem of the pollution and the car system in their area. It was beautiful. That’s the sort of place that we had here in the 80s and 90s. That’s why I was so happy when the kids actually showed us that this place is still alive, it is not a dump, and they just gave it to us, it was a natural thing. So we just rented it, cleaned it up, and built the skate park.”

Despite this apparently linear narration, Alto and his friends had to put in years of work to concretize the first ideas. Funding was scarce and public interest low, so GSF recurred to the direct help of close friends and direct actions.

“We started on the concrete in 2007 and worked ourselves. I could rent scaffolding and a digger and my friend started digging. That’s how you build a skate park. Then we had another friend bringing in big equipment to take the stuff out. And I had already called the place to dump all this stuff. So it’s a very long chain when you’re doing some serious stuff like that. You need some serious equipment. All this was done for free.”

Today GSF has expanded both spatially and in outreach. The park now extends to the other side of the road, where an abandoned railway bridge was repurposed to include various practice areas, a “flying” playground, and public toilets. Here the team holds various events such as competitions, parties, concerts, and a weekly second-hand market where residents of the Gamlebyen neighborhood have a chance to make some extra money while socializing. There are new grand plans too. Alto is trying to raise funds to refurbish the area under the bridge, which would reconnect the two separate parks through a car-free area.

“So the idea is that if we get the stage underneath the bridge we would link up with the children’s schools and all the different cultural facilities in the area. The place would be open for everyone to come and use it and we could have some bigger events.”

GSF is now in the process of filing all the necessary documents for the building permission, and the new public space under the bridge should break ground this coming winter. However, other developments are menacing the plans of Alto and his crew. The owner of the plot adjacent to the park, where GSF has its headquarters (really just a small garage), has filed a request to build a four-story high-class apartment building that would not only deprive GSF of one of its core facilities, but also speed up the ongoing gentrification of the area. GSF is only one of the many manifestations of a very compact group of residents who emerged, as Alto says, from punk and anti-fascist movements in the 1980s. Kai Reaver, assistant professor at the Oslo School of Architecture and Design and advisor for the National Association of Norwegian Architects, and Alto’s neighbor, is helping out by filing official complaints against the project.

“Unfortunately, I think the city sees us as Nimbyists,” Reaver says, referring to the concept of Not In My Back Yard. “But I think urbanism needs to better incorporate activist / punk / hacker logic into its discourse to counterweight the entirely new and mediocre city that has begun to surround us. Take for example the ‘Barcode’ plan, which attempts to deploy a program-intense logic, politically correct technocracy. And that’s right next to us – this totally mediocre ‘controlled’ city. Gamlebyen is the only place left in Oslo that really has any of that anti-niceness, anti-politically correct, non-bigness urbanism narrative."

"We aren’t really Nimbyists, we just don’t want property developers to destroy us. It’s more about fighting for our ‘right to the city’ as Henri Lefebvre points out."

"It seems that this 80s-90s punk logic is willing to fight quite hard. As architects we can help out by putting our good name behind some of the legal documents. It’s all in the text. In the procedure. And by pointing out some of the obvious illegal activity and logical fallacies of this building industry, we can hopefully keep them at bay for a few more years.” 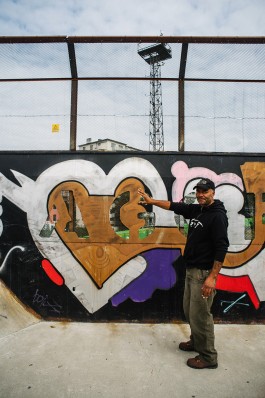 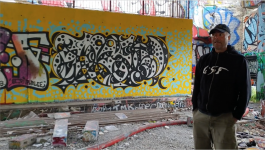