On Urtegata, in the center of the densely populated residential area of Tøyen, 700 meters from the train station and just next to a shiny modern mosque, stands a 100-year-old industrial building. At first glance it looks abandoned, but behind the scruffy facade and the big metal door hides a production site that offers opportunities to more than one “scene”.

Nizam Najjar and Lars Cuzner are artists with a background in visual arts, video production, and entrepreneurship, running the collective production and art space on Urtegata. Their activities focus on sustainable transportation alternatives for the inner city and infrastructure for visual content production. They are very committed to the local neighborhood and try hard to resist gentrification by maintaining actual production in the city center. They run an e-bike workshop/ rental/delivery service that especially during the Covid-19 lockdown was of great support to the local community.

“Across the street is the Salvation Army,” Lars says. “When physical distancing restrictions started, they faced distribution problems, but they needed to carry out the work of serving food. So far, they’ve been using cars, but a 50-meter car ride might take 15 minutes in Oslo. It was a match made in heaven! We lent them our Cargo e‑bikes, of course free of charge. Business aside, our bicycle fleet is at the disposal of people in the neighborhood that need it. We support people with disabilities, elderly that need important medication, and of course any kind of insurgents.”

It all started 10 years ago when Lars was involved in a group of architects and designers who like to build things themselves. The idea was to create a shared workshop for artists and other creative people, with high-quality tools and the really simple concept of giving everyone access to professional means of production. After researching similar places abroad, they rented the space. It was empty and run down but fitted the idea perfectly. “This was going on here for about seven years, and then Fellesverkstedet [the name of the open-access workshop] moved a 15-minute walk away. I didn’t want to let this place go. At that point, me and Nizam have been working together for three years on film projects. Nizam was starting the idea with the bikes and needed a space. This fitted again really well.”

This year marked the hundredth anniversary of the building, originally a factory for prototyping and construction with a metal structure and an open floor plan. Back in the 1970s it used to be Norway’s biggest mosque and is still listed as a “cultural” building. The owner is the neighboring mosque. “Tøyen has often been portrayed as a vulnerable neighborhood in the local media. But the gentrification has actually begun long ago.”

“We wanted to combine a new local business with our network in the cultural scene. The local, national art scene is very homogeneous. And this is just the way it is. Our network is not the normal network. We don’t stick to one form of art. Usually art spaces gather people of the same discipline – visual artists stick to each other, theater people hang out with theater people, the architects and so on. But it’s really boring and you never really meet new people since these networks are not really open. With a mix of different disciplines within the arts in our group, we end up naturally creating a mix, offering an alternative to the standardized groupings. We can be very resourceful within that, not turning culture into a commercial business. We don’t have an open door. It’s a production space primarily. We also do some video and photo production but it is all non-profit. We don’t need this place to be open to the public in the sense that it’s always accessible and we can have events. Those kinds of things need funding. Then they’ll change the traffic in the street as well. We don’t really know how that’s going to work out. The most important thing for us is to maintain the symbiosis in the area.”

Scruffy buildings, municipal housing, drug use issues, and mental health challenges are often features that the media use to describe Tøyen, implying that specific groups are unwanted and a problem for the district. Although Urtegata is a very small street and the drug users indeed own the sidewalks, Lars and Nizam tell us that people don’t have a problem with each other on this street. It just seems to work. There is mutual respect and acceptance. “They watch our door, so you know, we have almost 24-hour security because anybody who tries to break in gets the whole crew against them. They trust us and they just leave us alone. And we just leave them alone. It’s not ideological. We’re just trying to fit in on the street. And it’s cool. This is their turf and I guess we respected that enough. Feeling at home is also being left alone, to not be bothered by things that are less socially accepted.”

But there’s always some curious people who wander in when they are lucky and the door is open, and Lars and Nizam often give them a tour. The space is gorgeous, no less than 1500 square meters. And at the lowest point it is almost 15 meters under the ceiling. You feel like you’re entering a cathedral, so it’s easy to get curious. They have put a lot of effort into making the space feel like a room you can use every day. It’s not a storage, not a warehouse anymore, not a factory.

“We want to have production in here,” Lars explains. “It’s aligned with the spirit of the building. But when we talk about production, it doesn’t have to be heavy industrial production. We’re talking about multimedia production. We have a painting studio, a steaming section, we have a media room and a sound production room, and the bike workshop is downstairs. We are also re-sourcing material from museums and galleries that is going to get thrown out. It’s an operational space, working all the time. Anybody who wants to come in and work is very welcome. We want to work, you know, we don’t want to administer a visiting center.”

Although fostered by personal interests, the management of the space is always open to welcoming contributions, especially from local actors. “We’re definitely interested in doing this in symbiosis with the neighborhood because we like this place. We like this area. We live around here. We like the people that we have to deal with all the time. When I say ‘deal with’ – not every interaction is based on commercial exchange. We’re interested in operating as an open facility for projects. We offer the space to people for low maintenance activities, who are aware of the place and know how to use the facilities.”

Lars wants to stick to the topic of the building. “This the base for a lot of decisions that we take."

"We’ve been in this space 10 years now and we’ve learned to understand how to work with the neighborhood without changing it. We have seen the transformation. This part of town has been threatened by gentrification for years and we could easily contribute to that."

Our location is a cultural hub and we have this big space and this is usually what happens with gentrification projects. They allow these cultural projects to flourish and then make it attractive not for the people that live there, but for new people to replace them.”

With Tøyen being renewed through municipal funds, the local street scene increasingly becomes an attraction for hipsters and entrepreneurs. New jobs are emerging and more and more people want to move here. “We reject a lot of these attempts to turn our venture into some kind of renewal of the area because these renewals are usually top-down decisions and they don’t necessarily make things better for people who live there. We like our neighbors and they like us and this works pretty well, but the history of the space is important, and it shouldn’t be misused or it would be easy to misuse it. So the bike delivery project is a kind of metaphor. It’s a means of transportation that naturally makes us stay local, not travelling big distances but working with our neighbors, and that includes the drug users and all the small businesses, and everybody who uses the same area.”

“The challenge is how to create a stable, long-term production space in the city center, focusing on giving access to quality tools, guidance, and infrastructure. In a fast-growing city like Oslo, like many others we’ve also felt the chills of eviction many times while trying to stand up straight on our own feet. The question is how to be active but stay independent and not fall into the rabbit hole of endlessly hunting for funds.” 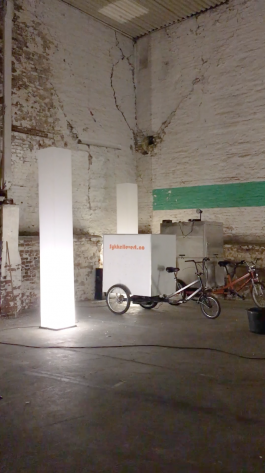 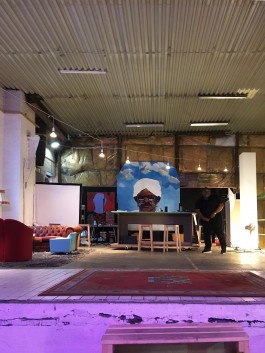