Until the 1960s the banks of the Akerselva, the river that runs through the middle of Oslo, were full of wooden boats all the way up to the waterfalls, but due to rapid urbanization these boats have disappeared completely. The Akerselva Wooden Boat Association is working to reactivate the wooden boat culture, combining handicraft and local tradition and promoting a sustainable, alternative mode of transport between the fjord and neighborhoods in the city center.

In 1960 the new Oslo Central Station was built, cutting off the river from the fjord. Ever since, the river has been flowing through an 800-meter-long tunnel, hidden under the city, until the Akerselva Wooden Boat Association rediscovered this connection and made it available to the public.

Aslak Juell Kristensen, manager of the association, took us for a ride, and from the water he showed us an important component of the city’s history. The river divides eastern Oslo, traditionally the poorer area but also the most diverse, from the wealthier west. In the last couple of years the banks of the Akerselva have changed extensively, especially around the opera house and the huge urban development at Bjørvika. “We see that the river can play a different role,” Aslak notes. “Instead of separating, it should be used to connect the people and the different areas. When you ride the boat, you see the complexity of the city. You see the new and the old, from a distance, from the water.”

“Today we have two docks,” he continues. “One up north and one here in Grønland. The project of a wooden boat harbor in Vaterland has gone better than expected, but there have been some challenges in terms of security. Vaterland is a heavily congested area, but boats along the riverbank enrich the cityscape, and we believe that our presence and activity – along with other players – makes the area more pleasant and has led to a noticeable improvement and less vandalism.”

The association is based on a membership system where members have the right to use and share the boats. For many years they have been collecting classic old boats from all over Norway, restoring and returning them to the river where they once belonged. “At the moment we have 25 boats in our fleet,” Aslak explains. “We have a lot of different models and types. We’ve started creating a Living Museum, telling the story of each boat. Since 2017 we have re-established moorings along the river. We started with the pilot project with four berths and received permission from the Urban Environment Agency to expand, so in 2018 we created eight new berths. All berths are now occupied, but we hope to be able to expand further, both up and down the river."

"Norway has a great boat-building culture that is about to disappear, and our goal is to preserve it.”

Boat building and operation poses serious environmental challenges, for example with the engine fumes and the toxic paints and varnishes, but the association is trying to raise awareness by running workshops on restoration and maintenance where they use only local and biodegradable material. “The wood is from all over Norway and we use cold pressed linseed oil from Sweden,” Aslak points out.

For the time being the boats are mostly used for recreation, but Aslak’s ambition for the future is to evolve into a form of sustainable urban transportation, with the hope that the city will recognize its value and integrate it into the broader network. “We are currently working on a pilot project, a six-meter-long ferry for 12 people. And we are open to discussion with the public transportation company. We see a lot of potential for an alternative to e-bikes, car sharing, rollers. Boats offer a different perspective to the city, a different speed.” The challenge is of course to keep the river clean and not disturb the ecosystem. “We’re collaborating with the Oslo area fish administration and measuring the water quality for them. By the way, did you know that salmon swim up the Akerselva? You can fish salmon up to six-seven kilos in the inner city.”

As we come to discover, there are many place-making initiatives that currently focus on Oslo’s waters, but Aslak admits that they should be collaborating together much more, since they have a common goal, the promotion of the water as a natural urban environment. “The water is like a public space that is always in movement. Actually, you could roll from the river to the whole world. This freedom of movement and not thinking of borders is unique for Oslo – we should be promoting it much more.” 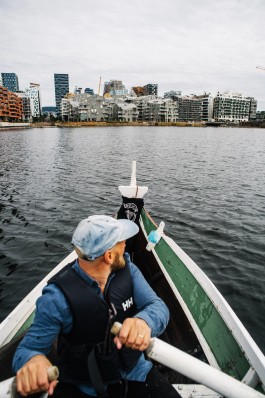 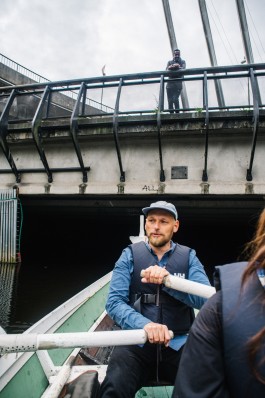 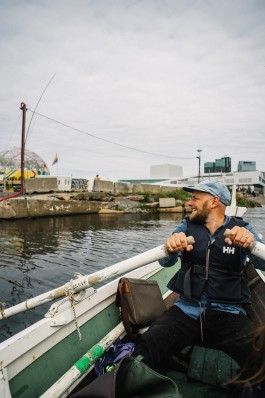 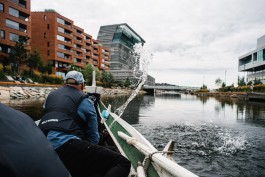